Skip to the content
Home / Environment / India: The use of plastic bag is horrifying worse in sub-urban 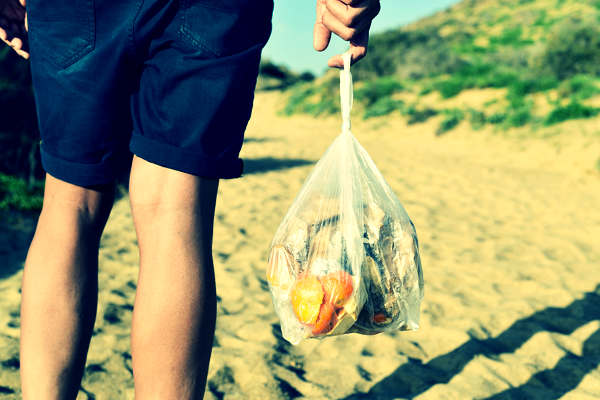 After complain about the illegal mass burning of plastic at Delhi, the government took immediate step and banned disposable plastic items in whole National Capital Territory (NCT) areas of Delhi. (1) India generates around 54 lakh tonnes of plastic waste annually and contribute around 60 percent of plastic waste dumped into the ocean. Moreover, some experts estimate that India will increase to 165 million tonnes of annual waste by 2030. (2)

Plastic bags are non-biodegradable products i.e. they do not decay. It takes thousands of years before one plastic bag can turn into small particles. Plastic bags are made of various chemicals i.e. xylene, ethylene oxide and benzene which are very harmful to the health and the environment, even they are key contributors to various diseases and disorder in human. (3) Many chemical additives that gave plastic desirable performance properties also have negative environmental and human health effects. (4) (6)

Toxic chemicals of plastic bags are released whether by burning or throwing which directly or indirectly cause harm to the society. (3) Plastic waste is deceptive for birds and other wildlife, who mistake it for food can die of starvation. (5) A report suggests that “the amount of plastic manufactured in the first ten years of this century eclipse the total produced in the entire last century”. The report also suggests, about 8 percent of world oil production goes to manufacturing plastic. (6)

In spite of Government initiatives to ban plastic bags in some states like Bengaluru, Delhi, Maharashtra, Punjab, West Bengal etc. since 2009-2010, (7) the traders, manufactures and even public protests against the ban. (8) (9) With the planning to eliminate around 25 percent of plastic bags containing less than 50 microns from Delhi, (10) National Green Tribunal has imposed fines of Rs.5000, if caught carrying a plastic bag in Delhi. (11)

The present scenario in sub-urban is worse:

Shockingly, every respondent (100 percent) was still providing plastic bags (below 50 microns) and around 82 percent used plastic bags below 20 microns to the customers for at least last one year. Fast food stores (97 percent) were wrapping food in plastic bags which were less than 20 microns. To make situation worse, most of curry, rice, dal etc. were provided/packed in plastic bags (20 microns) at around 30 to 70 degrees Celsius temperature. The study also found that public while shopping, encouraged shopkeepers to give plastic bags.

After inquiring from few shopkeepers, according to them to carry purchased items, public demands carry bags which in turn results circulation of carry bags in market. On an average, minimum 180 carry bags (below 20 microns) were circulated from per fast food store per day. After enquiring about environmental consequence, they started suggesting us about other man-made pollution in their locality. It felt that they were trying to avoid the pollution free topic and focused more on business revenues as according to them if they stop offering carry bags to customers they may lose many customers. Also, most of them suggested in this financial ups and downs situation losing customers may bring divesting results to their business.

However, it felt that most of respondents know the consequences of using of plastic bags in our daily life was affecting both human and environment. In past local government and even market committees had taken initiatives to ban plastic bags but only for sort term. It was the pressure from market competition and public they were bound to offer plastic bags. Moreover, every store owners agreed that providing plastic bags for products increases cost. Hence, this leads in search for low quality plastic bags (less than 20 microns).

The other side of the story:

After analyzing the situation from one side, another study was conducted to find the other side of the problem, the public or the consumer side as government had recently allotted Rs.7856 crores (2016-17) on Swatch Bharat Abhiyaan and already spend 9370 crores in 2015-16 out of 742 crores spend on West Bengal. (12) A response from the sample of 1000 people from sub-urban area (distribution of response is same as Table 1) age group from 35 – 50 years was collected.

The study suggests that the respondents were lack in taking initiatives, as when it is time to take initiatives and actions, every respondent starts blame game. It was a never-ending cycle, and if government tries to breaks, public and trades goes for strikes. (8) (9) If the respondents were inquired for information on local pollution, most people are awake and well informed about his/her environment but if they had been inquired about daily life practice to protect his/her local environment only few positive responses were received.